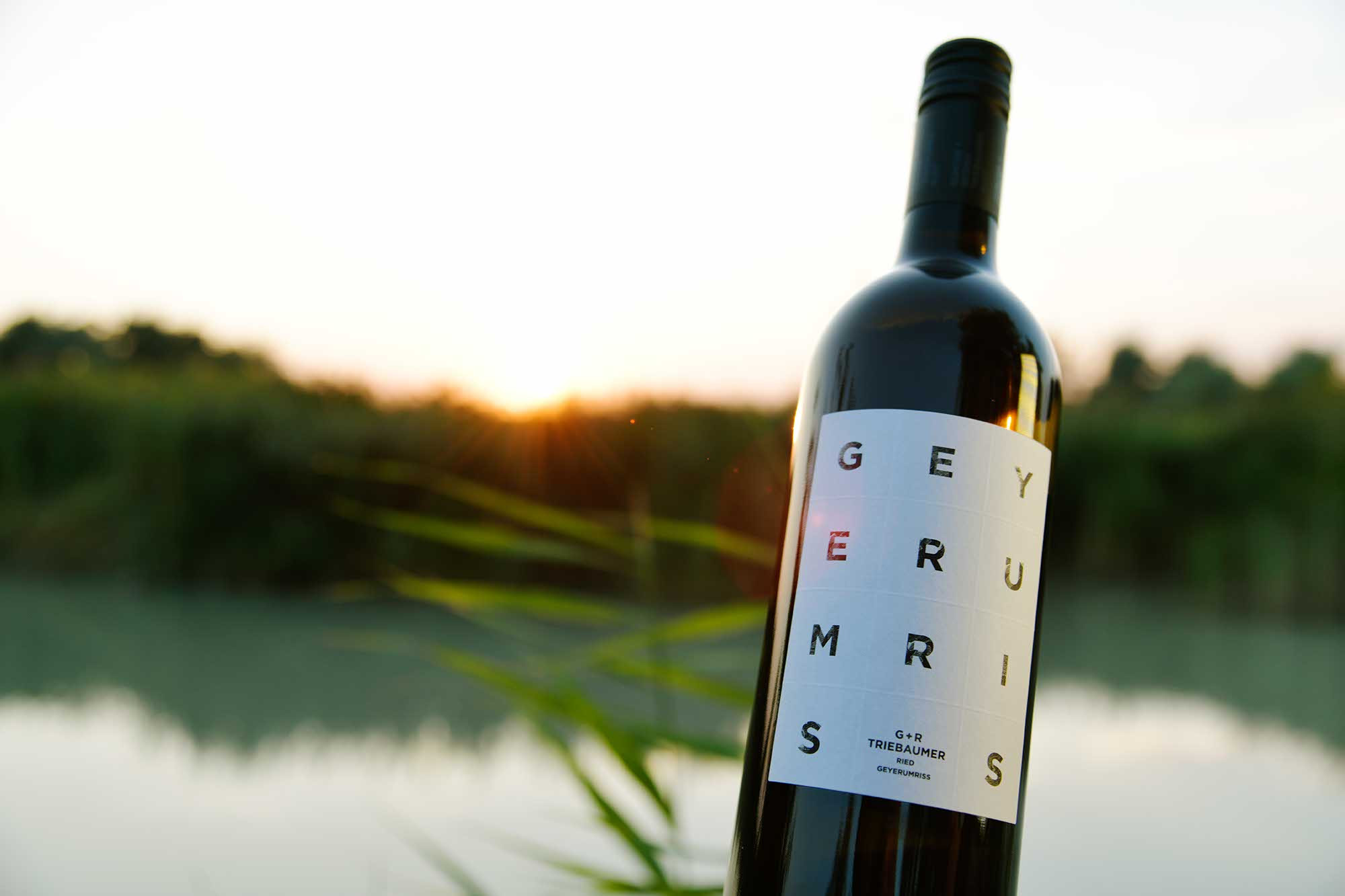 The Geyerumriss is located exactly to the west of Rust, on the Mörbisch side, and consists of slate weathered soil without any lime content, although opposite the main road at the forest outline the white limestone massively comes up the surface. Apparently, previous generations have intuitively made a division here through the main traffic route to Eisenstadt. Most of the location has direct eye contact with the Rust Bay and the lake.

In the Rust Great Terrace division, the outline of the Geyerumriss, as a northern continuation of the Plachen, belongs to the third and thus medium elevation level - but without the clay portion that is characteristic for the Plachen. The site is exposed to east-north-east and the drainage is good, also due to the increased proportion of small slate pieces.

Where the name comes from remains unclear. Neither can be explained the denomination „Geyer“ of  the western bordering single vineyard. The appendix "umriss"(outline), however, indicates that at least the greater part of the site was only created with the expansion of the vineyard area in the 18th and 19th centuries.

The development of the vineyard

The predecessor vineyard, which Günter's father Paul Triebaumer acquired in the 1980s, had been planted out after the war and, as a child of its time, with a variety of grape vines such as Neuburger, Welschriesling, Pinot Blanc, Traminer, Müller Thurgau and Chardonnay, which the old people also called "Goldburgunder". Also a few not grafted vines ("Direktträger") like the Delaware and the Blue Jacquez still remained, but these were not very popular with the harvesting teams and therefore dropped on the ground.

In 1987 the site was cleared and replanted in 1990. Paul Triebaumer himself produced the Furmint and Chardonnay seedlings - with scions from plants he trusted. A correct decision to this day!

The vineyard was planted as a double-vine cultivation with a medium grape zone height, and over the course of time, it has undergone various adaptations such as additional pairs of stainless steel wires or rejuvenation from the grafting point upwards, so that in the meantime growth and yield have achieved a natural balance.

In principle, the Geyerumriss would also be suitable to produce Ausbruch annually, as for example in the 2004 vintage, but only under the condition of early netting, since a power line runs diagonally through the area of the slope ridge - a kind of sun terrace for the deadly enemies: the starlings. 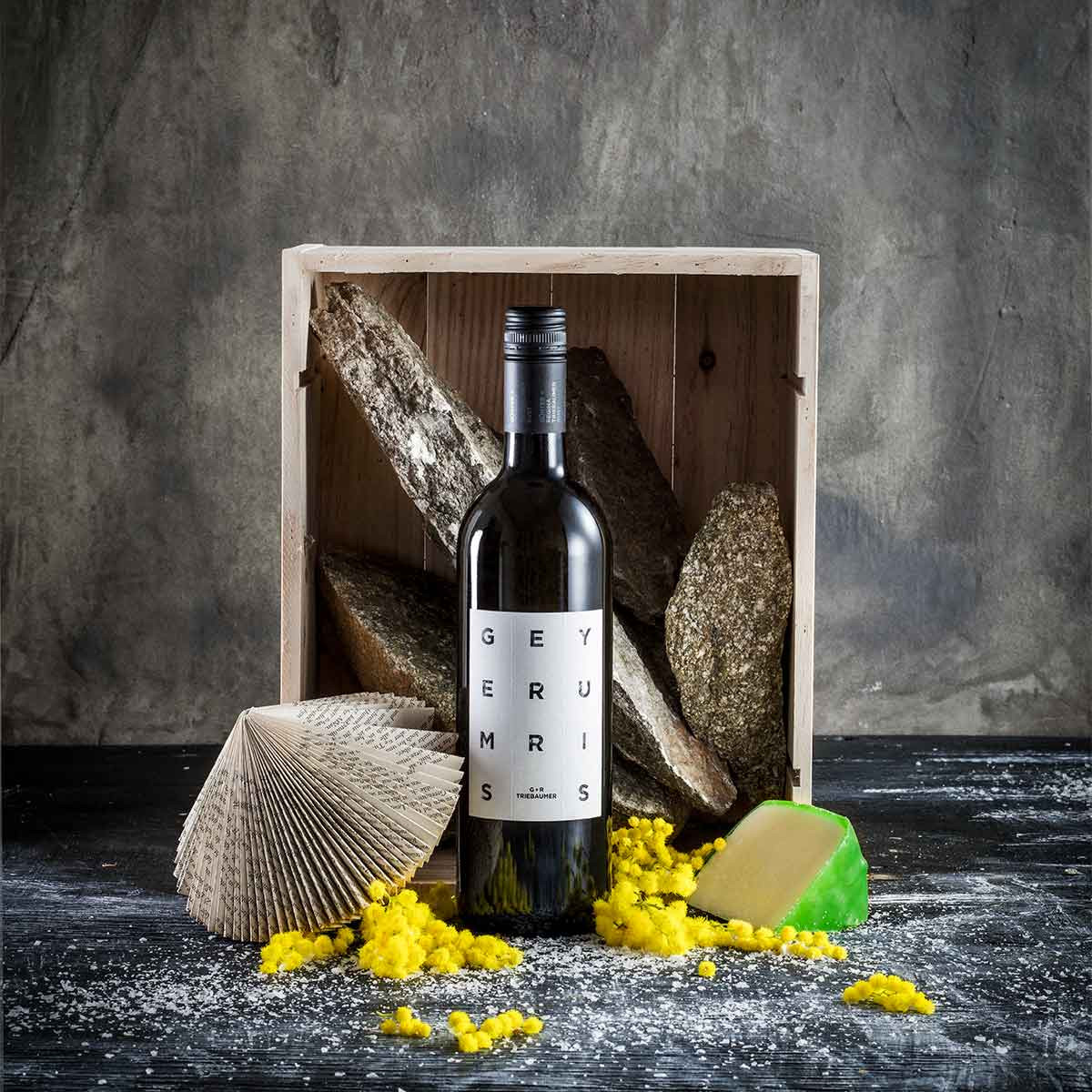 Vineyard management of the Geyerumriss

As far as vineyard management is concerned, the Geyerumriss is one of those vineyards where, apart from shoot positioning, little foliage work is required, as it is a "grown-up" vineyard with a rather low yield and a naturally loose grape zone.

The Chardonnay material, which has been cultivated for four generations, characteristically flowers very early - usually already at the end of May. This often involves bad, windy and cool flowering weather, which always results in a noticeable degree of coulure.

The Furmint also develops a small grape phenotype here, which becomes more and more differentiated as the vines age. As a result, the grapes are quite small and the selective hand harvest is correspondingly slow. These "little grapes" almost always hang in the shade/half-shade, which is definitely intended. This way, a considerable amount of a juicy characteristic fruit remains until the wine is finished, a fact which distinguishes a Geyerumriss.

As with all white wines from Rust silicate soils, a nice citrus touch can be noticed in the finish which keeps the product compact. It is beautiful to be able to rely on something like this! Our Furmints and Chardonnays would almost always be able to absorb a theoretical dose of wood, but this will not happen for the time being. Fermented in steel tanks for months, the Geyerumriss develops a very characteristic fruit of yellow apples, ripe quinces, juicy pears, sugar melons and yellow meadow flowers, lime-tree blossoms and also acacia flowers and -honey. In addition, there is always a serious steely touch, which we have been appreciating for decades. However, this power is always a side effect of a complete physiological ripeness, which is what matters most to us.

Another characteristic of our vine material is the comparatively thin skin of the Ruster Furmint. This requires a certain sensitivity in determining the time of harvest. Wait one day too long and the Bortrytis is there overnight! That again means expensive and slow selection, but in the meantime and having survived enormous nervous tension, we are used to it.

The most widely used rootstock in Rust is the Kober 5 BB. It has proved most reliable and least sensitive.

If you have bravely read the text up to this point, you are welcome to visit our winery and find out whether the Furmint really ages as well as it has been promised. We will see!